Aloha to you,  my website visitors seeking to learn about lomilomi.

Lomilomi, also written lomi lomi or simply lomi, is the bodywork component of traditional Hawaiian healing arts. It has been used in the Hawaiian islands for centuries.   Mana lomi®, the specific style that is the foundation of my work, comes from the Big Island.  It is one of many styles of lomi lomi.

Just as the English term massage refers to many distinct massage modalities, so also the Hawaiian term lomi lomi refers to various distinct types of  massage. The Hawaiian word lomi lomi can be translated into English as massage or literally rub rub, yet it refers to healing work broader in scope than the western concept of massage.

I meet many non Hawaiian people who mistakenly believe that lomi lomi is one particular massage modality - specifically many people believe that lomi lomi is a style of bodywork that uses lots of dancelike, flowing forearm strokes which wash freely over the receiver's minimally draped body in a way frequently compared to ocean waves.  This particular lomilomi style is known as Temple Lomi.   My own initial lomi lomi experience was with Temple Lomi which I practiced from 1996-2003.

Hawaiian History: Why are there Multiple Lomilomi Lineages?

Firstly, the Hawaiian archipelago is composed of eight primary islands on which separate communities live.  In the earlier times of limited transportation and communication these separated communities naturally developed various unique bodywork techniques.

Secondly, as a traditional Polynesian oral culture, knowledge and skills passed individually from person to person. Without written records, recipients assumed responsibility for preserving the integrity of this learning.  Unlike our contemporary Western society where information is liberally shared via the written word and via the internet, people in old Hawaii were selective in whom they shared information with, and they often kept information and skills within their own family or community in order to maintain its integrity.

And thirdly, over the past 1000 years social and political situations in Hawaii such as invasions, assaults and religious evangelizing have prevented lomi lomi from being openly practiced, and Hawaiian families privately kept it alive. Being thus maintained underground, diverse styles of lomil lomi developed within individual families who each preserved what they found relevant.  Thus diverse styles of lomi lomi developed and exist today.

When lomi lomi started coming ‘above ground’ in the 1970’s.  Several different teachers began teaching lomi lomi from their own family lineage to anyone with a sincere desire to learn.  Technological advances in transportation and communication have supported the sharing of lomi lomi not only within Hawaii, but around the world.

When and How did Lomilomi spread outside of Hawaii,
to the Continental US, Europe, Asia, Australia, and elsewhere?

In 1972 the repressive 1887 sorcery law in Hawaii was lifted.  This discrimatory law which remained on the books from 1887-1972 mandated a $100-$200 fine or prison sentence of up to 6 months for anyone who attemped "to cure another by practice of socery, witchcraft... ho'omanamana... or other superstitious or deceitful methods".  Ho'omanamana is Hawaiian spirituality.  The words used in this law clearly reflect a very negative interpretation assigned to Hawaiian spirituality and tradtional healing.

Can you imagine how much the fine of $100-$200 could buy in 1887 when this socery law was first enacted!!!?! It's comparable to about $2.5-$5 million today.  With the repeal of the socery law in 1972, the taboo on traditional Hawaiian  healing arts was lifted, allowing lomi lomi to be openly  practiced again.

The Hawaiian cultural renaissance movement initiated in the 1970s and still occurring today encompasses traditional Hawaiian healing arts as well as Hawaiian language, traditional navigation, agriculture, hula, education, and more. Whoohoo!!  As a result of this renaissance, lomi lomi is once again being openly practiced in Hawaii, and in fact it has spread around the world and back.

What are some Lomilomi Lineages or Styles?

Outside Hawaii two lomi lomi lineages have been most widely shared.  The most well known and heavily marketed lineage is Temple Lomi.  Big Island Lomi is less well known.  Both approaches were modernized and popularized beginning in the 1970s  by gifted teachers from the Big Island and  Kaua'i respectively.  Additonal lomi lomi lineages are now also being practiced and shared both inside and outside of Hawai'i.  Here are lineages I have personal connection with.

Big Island Lomilomi, also known as traditional lomi lomi, comes through the lineage of the late native Hawaiian Aunty Margaret Kalehuamakanoelu'ulu'uonapali Machado on the Big Island.  During her four decades of teaching Aunty Margaret became legendary for sharing lomilomi using loving touch, for apprenticeships that included internal seawater cleansing and Christian prayers, and for the personal mana (spiritual energy) bestowed upon her by her grandfather.

Aunty Margaret was probably the most influential native Hawaiian to share specifically traditional style of lomi lomi with many people – native Hawaiian and others - who had a sincere desire to learn.

The Hawaiian Lomilomi Association is an educational, nonprofit organization supported by group of lomi lomi practitioners, many of whom are Native Hawaiian and many of whom practice Big Island Lomilomi.  I am a member of this group and attend their wonderful annual conference on the Big Island whenever I am able to.  This is a real treat.

Mana Lomi® is one specific branch of Big Island Lomi which was developed in its current form by Dr. Maka'ala Yates, DC after apprenticing with Aunty Margaret for 16 years.  Mana Lomi® is now taught internationally by a team of 10 certified teachers, myself included.  This entire website is primarily dedicated to my practice of Mana Lomi® which has been my primary work since 2003.

Iwi'ula Lomi comes from the linage of the late Aupuni Iwi'ula with whom I studied from 2000-2003.  Aupuni taught Hawaiian spirituality as it was practiced by his lineage on Kaua'i before European contact in Hawaii in the late 1800s.   Aupuni taught me energy based healing meditations and Hawaiian prayers. In his presence I was immersed in Hawaiian culture in a way new to me.  His program is designed so that students study ho'omana, Hawaiian spirituality for more than two years before they are permitted to study Iwi'ula syle Hawaiian bodywork.

Iwi'ula lomi lomi is done on a mat on the floor using prayer and specific strokes. It  has a strong energetic component.

Uhane Lomi is the healing lineage of native Hawaiian Kumu Harry Uhane Jim from Kaua'i.  I attended a residential workshop Harry taught on the Big Island in 2013, and hope to attend more of his classes in the future.  Harry is full of vital, palpable joy and is a powerful teacher.  Much of Harry's teaching focuses on ho'oponopono, on our beliefs and on our attitudes.  I am inspired by his presence and his way of teaching that love heals all trauma.

Some of the lomi lomi tools that Harry teaches include:

‘Opu huli, or lomi lomi of the abdomen was taught by the late Kalua Kaiahua, a traditional healer from Maui. Karen Leialoha Carrol is one of Uncle Kalua's students who continues to practice and teach this powerful work.  I was honored and delighted to attend an introductory workshop Kumu Karen taught in 2013.

Other traditional lineages exist as well; the ones mentioned here are the ones I have personal connection with.

Temple Lomi is also known as contemporary lomi, "Kahuna Bodywork" and "Sacred Touch". On the US mainland, in Europe and in Australia Temple Lomi is extremely popular.  Originally Temple lomi was developed by the late indigenous Hawaiian Abraham Kawaii from Kaua'i, drawing on his strong hula and Hawaiian martial arts background.  Abraham shared this bodywork widely with people from the continental US, Europe and Australia who were drawn to New Age consciousness.  I studied and practiced Temple Lomi from 1996-2003.

Temple Lomi teachings are often accompanied by teachings on Hawaiian healing and spiritual shamanism as interpreted by Californian Max Freedom Long and known as Huna.  Over the past 40 plus years as Temple Lomi has been passed from one person to the next, frequently without maintaining connection with its roots, Temple Lomi has evolved and been westernized.   The majority of videos currently on YouTube claiming to show lomilomi are of Temple Lomi. It is done - or might I say "performed" - with dancelike, flowing forearm strokes which wash freely over the receiver's minimally draped body like ocean waves.

Blended Lomilomi Styles:  Some (perhaps I should say many) lomi lomi teachers in the Continental US today have learned aspects of both Temple Lomi and traditional lomi and teach a blend of what they have learned from various teachers.

What do Various Lomilomi Linages have in Common? Lomi lomi today can be very different, depending on who is doing it. There is no one “right” way to do it; rather there are many approaches and techniques used by different Hawaiian healing practitioners. That said, in my experience all  styles share some basic characteristics.

Lomi lomi training emphasizes the practitioners’ responsibility to maintain our own physical, mental and spiritual well-being. Making choices that support the highest good allows us to be clear healing channels and to assist others in healing. Lomi lomi includes more than physical touch. It includes conducting mana - vital life force - in ourselves and in our clients. We each discover independently how this happens; no teacher can give it to us. 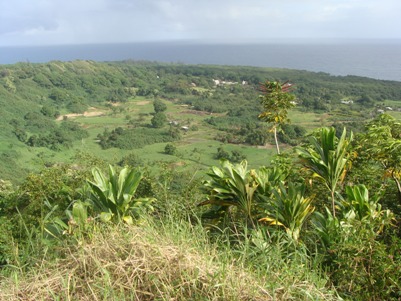 In the Hawaiian world view man, nature and Spirit form an equally bonded lokahi (harmony) triangle, held together by divine intention in order that all the things of the earth might be protected and nourished. This lokahi triangle forms a foundation which supports Hawaiian healing arts.

The traditional Hawaiian way is to live constantly aware of the binding threads which hold together all things great and small. The elements - wind, sun, water and land - and the plants and animals are all alive, conscious, sentient ancestral forms which interrelate with humanity as family. Humanity is responsible for caring for and protecting nature and nature is responsible for caring for and providing for us. Hawaiians know in their bones that we humans are in community with nature.

Lomi lomi is done with loving touch and employs mind and spirit healing techniques. Each person is integrated and equally divine in body, mind and soul. Indeed, love heals all trama.

Some techniques for healing mind and spirit incorporated with bodywork include sweat huts, internal cleanses and medicinal herbs and plants. Traditionally, the first step in treating physical ailments was ho’oponopono (to make right), the cleansing of negative occurrences of the past and transmuting negative energy into light, allowing us to move forward. Other spiritual tools often used with lomilomi include: oli - chant; pule – prayer; and ho’okuano’o – meditation.

Pule (prayer) historically played an important role in every aspect of traditional healing work, including lomilomi.

In summary, all of the lomi lomi lineages I've had experience with or have heard of include variations of these practices:

Thank you for reading my reflections on lomi lomi.

For more information visit www.lomilomi-massage
Email barbaraheard at msn dot com
Olympia, Washington  All materials are copyrighted. If you would like to post articles on your website or use it as training material, permission is granted as long as all contact and credit information remains intact. Thank you. 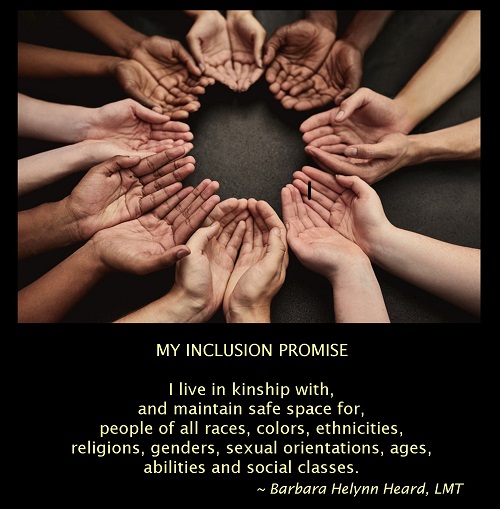